It took me quite awhile to work out the top 10 Cydia apps for iOS 5. I know many iDevice users (A4 devices) have turned their iOS to iOS 6 so I hope it is not too late to paste the list here as I believe still got millions of people out there using iOS 5. Let’s just chill and go through the app and tweaks one by one. Some of them can be used on iOS 6 too. Here you go!

1. SBSettings – Personally, I think SBSetting is really a must-have Cydia app among all the applications in Cydia store. Whether it is iOS 5 or iOS 6, SBSettings is so good to use and I can’t live without it. Why? It makes your iOS device move faster; It allows you to customize your iPhone settings; It makes your iPhone look fresh all the time with tons of free themes from A to Z. What else to expect?

2. StatusGoogle – As you can read from the app name, this is for people who use Google’s application everyday including Google search and Google weather. It is free to download from Cydia.

3. AdBlocker – Just like anybody else I hate pop-up ads. Every time when I am doing something with my iPhone, iPad, or iPod Touch while connected, ads always appear. AdBlocker is one of the greatest app to block these annoying ads. 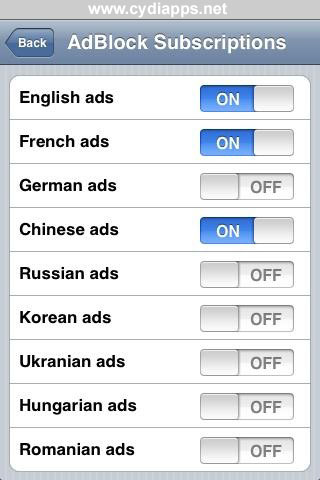 AdBlocker – One of the best Cydia apps

4. biteSMS – I din’t mentioned this before in the top 10 Cydia apps list before but now I would love to put it in. I read around and found biteSMS is one of the top downloaded Cydia apps because it allows you to get a better feature-rich text messaging experience.

5. iWork – Most people won’t think iWork is an important or top 10 must have apps but for people who need a mini-size Ms. Office in your iDevices, you need this app.

6. CyDelete – Any jailbroken iOS 5 need this. Because CyDelete is an app to help you delete any unwanted Cydia app, that’s why it is Cy(Cydia)Delete. However, if you want to uninstall Cydia completely, you can follow the steps here: Uninstall Cydia

8. Music Controls Pro – If you use your iDevices like a “walkman”, this app allows you to control the volume and send songs. It also shows the information of each song you are playing.

10. Kill Background – SBSettings make your iOS run faster and if you added with Kill Background, your iOS will run even faster. This app comes with a button that allows you to kill all running task with just one tap. That’s the top 10 Cydia apps that makes your iOS 5 runs better.